Badgers went to Oxford City Town Hall on 15th October to ask Oxford City Council to abandon plans to extend the Seacourt Park and Ride. The badgers living on the Seacourt flood plain and Green Belt have fine setts and foraging. Please don't build over this lovely land !

AS YOU CAN SEE -
THE PETITION PRESENTATION WENT SWIMMINGLY !

They were accompanied by several members of the Oxfordshire Badger Group, including Dominic Dyer, CEO of the Badger Trust, representatives of the local residents and Clr Ruthi Brandt. Clr Bob Price was generous with his time and received our petition with both interest and good humour. We used our half hour to get across the message that Seacourt is a dangerously flawed, short sighted and costly proposal that should be abandoned.

Think we got across our points effectively and all the signatories should be proud. The photos are good too!

Let's hope the Council think again about putting a car park on flood plain. Expect we have a battle ahead but we need to keep fighting for Oxford's badgers. 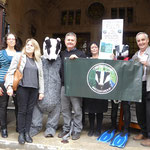 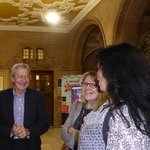 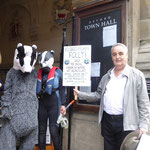 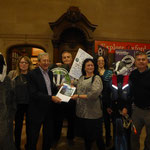 The Environment Agency has submitted a planning application for the £123 million Oxford Flood Alleviation  Scheme.   It threatens multiple badger setts along it's length. We join Hinksey residents in calling on Oxford City Council to reject it in favour of less environmentally damaging options. Please sign the petition here.

Save Luna the white badger

Watch the video and tell us you didn't feel tearful.